He stretched out His Hand… 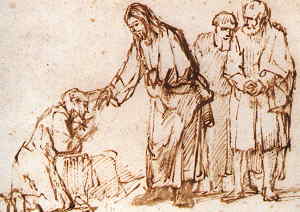 Jesus heals a leper, Rembrandt
Psalm 35:27
“The LORD be exalted, who delights in the well-being of his servant.”Did you know your Heavenly Father delights in your well-being? When David wrote Psalm 35 he was going through unjust persecution from his enemies, most probably King Saul, who hated him and was constantly pursuing him and trying to harm him. David called upon the Lord to fight for him and to contend with his enemies (verse 1). He knew the Lord as one who took pleasure in His servant’s well-being. The word translated “delights” in the verse above is the Hebrew word chaphets (חָפֵץ) which means “delighting in, having pleasure in”. David understood that the Lord actually takes pleasure in the well-being of those who serve Him- it pleases Him when His servants are well. But we are not simply the servants of the Lord! We become sons and daughters of our Heavenly Father when we put our faith in His Son Jesus:John 1:12
Yet to all who did receive him, to those who believed in his name, he gave the right to become children of God–So how much more does Jesus delight in our well-being as sons and daughters!!

In the book of Mark, we read the following account of the healing of a leper:

Mark 1:40-42 (NASB)
40And a leper came to Jesus, beseeching Him and falling on his knees before Him, and saying, “If You are willing, You can make me clean.” 41Moved with compassion, Jesus stretched out His hand and touched him, and said to him, “I am willing; be cleansed.” 42Immediately the leprosy left him and he was cleansed.

Lepers were outcasts in Jewish society. They were considered unclean and under the Law of Moses if you simply touched a leper you became unclean and had to offer a sacrifice in order to be ceremonially clean again (Leviticus 5:3-7). Furthermore under the Law lepers had to wear torn clothes, let their hair be unkempt, cover the lower part of their face and cry out, ‘Unclean! Unclean!’ They had to live alone, away from those who were healthy (see Leviticus 13:45-46). So the leper that came to Jesus not only suffered from the effects of the disease itself but he also bore the shame of being unclean. However having heard about the miracles that Jesus had already performed, he knew Jesus was able to heal him, he just didn’t know if He would heal him! That is a question I have heard many believers in Christ still ask- they believe Jesus can heal, but they’re not sure if it’s His will! Well because this leper was courageous enough to come to Jesus even in his uncertainty, today we have the answer! The leper fell on his knees before Jesus and implored Him “If You are willing (theló (θέλω), You can make me clean.”

The greek word translated “willing” in verses 40 and 41 is theló (θέλω) which means to will, wish, desire. So the leper was asking if it was Jesus’ desire to heal him. Jesus’ answer and response leaves us in no doubt! He wasn’t angry that this unclean man had dared to come near him without shouting “unclean, unclean” (which was breaking the Law of Moses); He was moved with compassion by the man’s suffering and reaching out to touch him, Jesus told him He was willing! Immediately the leper received his healing and was cleansed! A touch from Jesus was enough to purify this man who then couldn’t stop telling people what Jesus had done for him!

Jesus said anyone who has seen me has seen the father (John 14:9) and Hebrews 1:3 says Jesus is the exact representation of God’s being so we can be confident that Jesus’ response was a perfect reflection of our Heavenly Father’s heart towards the sick man.
​
Beloved, if you are struggling with any type of affliction today know for sure that as a son or daughter of your Heavenly Father, it is His desire to heal you. You can trust not only in His ability to heal you, but in His compassion and His desire to do so! Matthew 7:7-8 says:

So come to Jesus today, ask Him for whatever you need, and receive!