Do you know what counts? 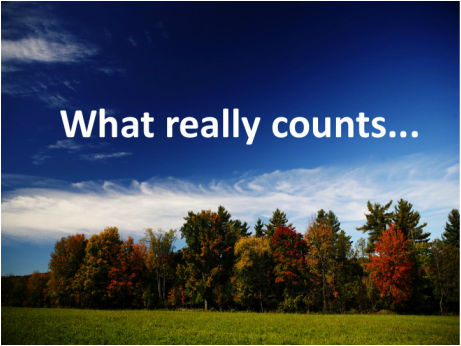 In my last post I focussed on our response to Jesus’ question:
“Who do you say I am?” . Today I want to address a different question:

So Jesus got straight to the heart of the issue and told him he needed to be born again:

John 3:3
Jesus replied, “Very truly I tell you, no one can see the kingdom of God unless they are born again.”

But Nicodemus couldn’t understand how it was possible to be born again because he was still thinking in terms of physical flesh: how could a grown man to go back into their mother’s womb? (John 3:4)

So Jesus explained that the rebirth He was speaking of was spiritual:

John 3:5-8
“Very truly I tell you, no one can enter the kingdom of God unless they are born of water and the Spirit. 6Flesh gives birth to flesh, but the Spirit gives birth to spirit. 7You should not be surprised at my saying, ‘You must be born again.’ 8The wind blows wherever it pleases. You hear its sound, but you cannot tell where it comes from or where it is going. So it is with everyone born of the Spirit.”

Jesus was talking about the rebirth that the prophet Ezekiel had spoken about 600 years earlier when God had said:

Ezekiel 36:25-27
25I will sprinkle clean water on you, and you will be clean; I will cleanse you from all your impurities and from all your idols. 26I will give you a new heartand put a new spirit in you; I will remove from you your heart of stone and give you a heart of flesh. 27And I will put my Spirit in you…

The water that cleanses us, which Ezekiel prophesied about, is the word Jesus speaks to us (John 15:3, Ephesians 5:26), and the new spirit we receive is from God – His very own Holy Spirit! Nicodemus would only be able to perceive spiritual truth about Jesus if he was born again with a new spirit, birthed by the Holy Spirit Himself. As the apostle Paul explained:

1 Corinthians 2:14
The person without the Spirit does not accept the things that come from the Spirit of God but considers them foolishness, and cannot understand them because they are discerned only through the Spirit.

The word for “Spirit” in Greek is “pneuma” which also means “wind”. That is why in John 3:8, Jesus used the analogy of the wind. Just as we can hear and sense the wind but cannot see it, so it is when we are born again spiritually – we begin to hear God’s voice and sense His Spirit but we don’t look any different in our flesh. We cannot see the change that has occurred but something incredible has happened!

2 Corinthians 5:17
Therefore, if anyone is in Christ, he is a new creation. The old has passed away; behold, the new has come.

We become a brand new creation, made in the image of the Heavenly Man, Jesus!

Describing Jesus as the “last Adam” and the “second man” Paul wrote:

1 Corinthians 15
If there is a natural body, there is also a spiritual body. 45So it is written: “The first man Adam became a living being”; the last Adam, a life-giving spirit. 46The spiritual did not come first, but the natural, and after that the spiritual. 47The first man was of the dust of the earth; the second man is of heaven. 48As was the earthly man, so are those who are of the earth; and as is the heavenly man, so also are those who are of heaven. 49 And just as we have borne the image of the earthly man, so shall we bear the image of the heavenly man.

God’s plan to give us a new heart and a new spirit was intended to “conform us to the image of His Son” as Paul explained in:

Romans 8:29
29For those God foreknew he also predestined to be conformed to the image of his Son, that he might be the firstborn among many brothers and sisters.

And that is exactly what happens when we are born again! Now just as we see Jesus with spiritual eyes and not according to the flesh, so we need to see ourselves that way too:

Galatians 6:15
Neither circumcision nor uncircumcision means anything; what counts is the new creation.

Because some false teachers were trying to compel the Galatian church to circumcise believers in order to keep the Old Covenant Law, Paul was telling them that these external things were worthless. The important thing to Our Father in Heaven is that we are a “new creation”, born again by His Spirit.

When Jesus was teaching in the synagogue in Capernaum, the people asked Him
“What must we do to do the works God requires?” (John 6:28)
He answered, “The work of God is this: to believe in the one he has sent.” (John 6:29).

Beloved today your Heavenly Father wants you to know who you are in Christ: You are a new creation, the old has passed away; behold, the new has come.
You have been born again by the Holy Spirit and are conformed to the image of the Heavenly Man Jesus Christ. The only work God requires of you is to believe in His Son. Stop seeing yourself according to the flesh, and start seeing yourself according to the Spirit, as a new creation which is the only thing that counts!

​If you haven’t yet made a decision about who Jesus it, it is the singular most important decision you will ever make.
To help you decide, this is what Jesus said about Himself (Jesus’ words in red):

“For God so loved the world that he gave his one and only Son, that whoever believes in him shall not perish but have eternal life.” John 3:16

Jesus answered, “I am the way and the truth and the life. No one comes to the Father except through me.” John 14:6
​
“Anyone who has seen me has seen the Father.” John 14:9

“But what about you?” he asked. “Who do you say I am?”
Simon Peter answered, “You are the Messiah, the Son of the living God.”
Jesus replied, “Blessed are you, Simon son of Jonah, for this was not revealed to you by flesh and blood, but by my Father in heaven.” Matthew 16:15-17

“I am the living bread that came down from heaven. Whoever eats this bread will live forever. This bread is my flesh, which I will give for the life of the world.” John 6:51