Who do YOU say I am? 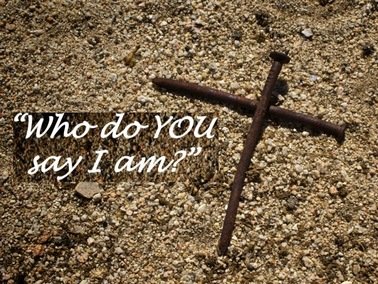 Matthew 16:15-17
15“But what about you?” he asked. “Who do you say I am?”
16Simon Peter answered, “You are the Messiah, the Son of the living God.”
17Jesus replied, “Blessed are you, Simon son of Jonah, for this was not revealed to you by flesh and blood, but by my Father in heaven.

At some point in their lives, everyone has to make a decision about who Jesus is – was He just a man, was He simply a good teacher, a prophet or is He more? This was Peter’s answer:

“You are the Messiah, the Son of the living God.”

By the time Jesus had asked His disciples this question, they had seen Him heal countless sick people: He had restored sight to the blind (Matthew 9:29), cleansed the lepers (Matthew 8:3), made the lame walk (Matthew 9:6), the mute speak (Matthew 9:33) and He had even raised the dead (Matthew 9:25)! Twice they had seen Him feed thousands of people with just a few loaves of bread and a few small fish (Matthew 14:21, Matthew 15:38) and He’d even walked on the water (Matthew 14:25)! Yet Jesus said it was by revelation from the Father in heaven that Peter declared that He was the Son of the living God. Seeing all those miracles firsthand was not enough to discern the truth about Jesus’ identity, Peter needed revelation from God.

Luke 4 recounts when Jesus returned to His hometown of Nazareth and taught in the synagogue. News of His miracles had spread throughout the whole countryside and everyone was praising Him, so the people of Nazareth must have been excited to come and see Jesus teach in their synagogue.
Luke 4:14 says Jesus returned to Galilee in the “power of the Spirit” and yet in Mark’s Gospel account of the same event, he writes that Jesus “could not do any miracles there, except lay his hands on a few sick people and heal them.”(Mark 6:5). So why was it that everywhere else He went Jesus had performed many healings and miracles but in His hometown so few?

Well in the three accounts in the Gospels, the writers tell us this:

Luke 4:22, 24
22All spoke well of him and were amazed at the gracious words that came from his lips. “Isn’t this Joseph’s son?” they asked.”
24“Truly I tell you,” he continued, “no prophet is accepted in his hometown

Matthew 13:55-57
55“Isn’t this the carpenter’s son? Isn’t his mother’s name Mary, and aren’t his brothers James, Joseph, Simon and Judas? 56Aren’t all his sisters with us? Where then did this man get all these things?” 57And they took offence at him. But Jesus said to them, “A prophet is not without honor except in his own town and in his own home.”

Mark 6:3-6
3Isn’t this the carpenter? Isn’t this Mary’s son and the brother of James, Joseph, Judas and Simon? Aren’t his sisters here with us?” And they took offence at him.
4Jesus said to them, “A prophet is not without honor except in his own town, among his relatives and in his own home.” 5He could not do any miracles there, except lay his hands on a few sick people and heal them. 6He was amazed at their lack of faith.

The people of Nazareth could not see beyond Jesus’ flesh. In fact they took offence at what they saw and heard (Matthew 13:57, Mark 6:3)! They saw Jesus simply as a carpenter, the son of Mary and Joseph. They’d seen Him growing up. They knew His brothers and sisters. They could only see Him in the flesh, so even though they’d heard of His incredible miracles they missed out on the power of the Spirit!

It was the same with the Pharisees. They had seen Jesus perform great signs in front of their eyes (Matthew 12:13, Luke 13:13) and yet they rejected Him!

Yet those who had the revelation of who Jesus was, received from Him the healing they so desperately needed. The Canaanite woman in Matthew 15:21-28 is an example of this. Although she was not even an Israelite but a gentile woman, she called Jesus “Lord”. She recognised Him as the “Son of David”- Israel’s long awaited Messiah. She cried out to Him: “Lord, Son of David, have mercy on me! My daughter is demon-possessed and suffering terribly.”(Matthew 15:22). Even though Jesus did not immediately respond to her and even though the disciples were urging Him to send her away, because of her humility, persistence and lack of offence, her daughter was healed and she was one of only two people that Jesus said had great faith (Matthew 15:28).

Jesus said “The thief comes only to steal and kill and destroy; I came that they may have life, and have it abundantly.” (John 10:10).

The word translated “may have” and “have” in John 10:10 is the greek word echo (ἔχω) meaning to have, to hold, to possess. It is used twice in that verse in the present tense and active subjunctive form. This means that in order to possess the abundant life that Jesus came to give us, we need to continually, actively take hold of it. Possessing abundant life from Jesus requires a conscious decision on our part every time we are faced with a situation where the thief (Satan) tries to steal from us. But in order to be able to receive from Jesus, we need a revelation of who He is just as the Canaanite woman and Peter had.

The day after Jesus had multiplied the five loaves and the two fish, which fed over 5000 people, He went to the synagogue in Capernaum and taught that He is “the living bread, which came down from heaven” (John 6:51). The Jews couldn’t understand this and began to argue about it. Then Jesus continued:

“Very truly I tell you, unless you eat the flesh of the Son of Man and drink his blood, you have no life in you. 54Whoever eats my flesh and drinks my blood has eternal life, and I will raise them up at the last day. 55For my flesh is real food and my blood is real drink. (John 6:53-55).

Many of Jesus’ followers found this teaching too hard to accept so He said to them:

61….“Does this offend you? 62Then what if you see the Son of Man ascend to where he was before! 63The Spirit gives life; the flesh counts for nothing. The words I have spoken to you—they are full of the Spirit and life.”
​(John 6:61b-63)

Two thousand years later and Jesus continues to offend people. But His words are full of Spirit and life. If we want to possess abundant life, we need to keep feeding on Jesus who is the living word of God. Those who received forgiveness and miraculous healing from Jesus were not offended by Him in the flesh, but knew Him according to the Spirit. The apostle Paul said this:

2 Corinthians 5:16b
16…Even though we once regarded Christ according to the flesh, we regard him thus no longer.

Beloved if you need a touch from Jesus today whether for yourself or a loved one, then ask your Heavenly Father to give you a fresh revelation of His Son and just as the Canaanite woman received from Jesus, so you too will receive. We can pray this prayer which the apostle Paul prayed long ago:

Ephesians 1:17
17I keep asking that the God of our Lord Jesus Christ, the glorious Father, may give you the Spirit of wisdom and revelation, so that you may know him better. 18I pray that the eyes of your heart may be enlightened in order that you may know the hope to which he has called you, the riches of his glorious inheritance in his holy people, 19and his incomparably great power for us who believe. That power is the same as the mighty strength 20he exerted when he raised Christ from the dead and seated him at his right hand in the heavenly realms, 21far above all rule and authority, power and dominion, and every name that is invoked, not only in the present age but also in the one to come. 22And God placed all things under his feet and appointed him to be head over everything for the church, 23which is his body, the fullness of him who fills everything in every way.

If you haven’t yet made a decision about who Jesus it, it is the singular most important decision you will ever make.
To help you decide, this is what Jesus said about Himself (Jesus’ words in red):

“For God so loved the world that he gave his one and only Son, that whoever believes in him shall not perish but have eternal life.” John 3:16

Jesus answered, “I am the way and the truth and the life. No one comes to the Father except through me.” John 14:6

“But what about you?” he asked. “Who do you say I am?”
Simon Peter answered, “You are the Messiah, the Son of the living God.”
Jesus replied, “Blessed are you, Simon son of Jonah, for this was not revealed to you by flesh and blood, but by my Father in heaven.“ Matthew 16:15-17

“I am the living bread that came down from heaven. Whoever eats this bread will live forever. This bread is my flesh, which I will give for the life of the world.” John 6:51

The woman said, “I know that Messiah” (called Christ) “is coming. When he comes, he will explain everything to us.”
Then Jesus declared, “I, the one speaking to you—I am he.” John 4:25-26

Then they asked him, “What must we do to do the works God requires?”
Jesus answered, “The work of God is this: to believe in the one he has sent.” John 6:28-29

This website uses cookies to improve your experience while you navigate through the website. Out of these, the cookies that are categorized as necessary are stored on your browser as they are essential for the working of basic functionalities of the website. We also use third-party cookies that help us analyze and understand how you use this website. These cookies will be stored in your browser only with your consent. You also have the option to opt-out of these cookies. But opting out of some of these cookies may affect your browsing experience.
Necessary Always Enabled

Any cookies that may not be particularly necessary for the website to function and is used specifically to collect user personal data via analytics, ads, other embedded contents are termed as non-necessary cookies. It is mandatory to procure user consent prior to running these cookies on your website.