With You I am Well Pleased! 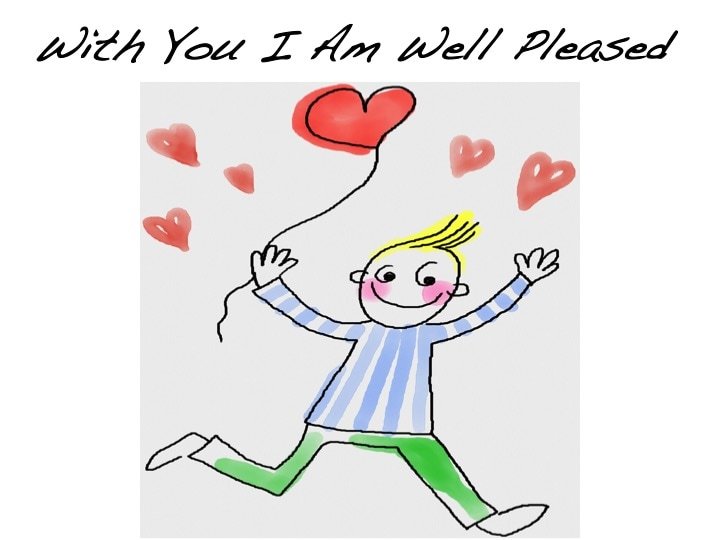 Foundations are so important. As it’s the beginning of the year, I’ve been thinking about spiritual foundations. If these are strong, we will be able to withstand any trials we are faced with and whatever we build will last. Jesus said:

The way a child is raised has a huge impact on its adult life because we build upon our formative years. Those who have been brought up in loving secure homes tend to do much better than those whose childhoods have been marked by instability, fear, anxiety or a lack of love.

I was thinking about Jesus’ early life and the human parents God selected for Him. Mary and Joseph were not materially wealthy – Joseph was a carpenter and the circumstances of Jesus’ birth together with the purification sacrifice they offered at the Temple afterwards (“a pair of doves or two young pigeons” Luke 2:24) indicated they couldn’t afford to offer a lamb (see Leviticus 12:8). However they were full of faith. Mary “believed the Lord would fulfill his promises to her” (Luke 1:45) and Joseph was faithful to God’s Law and a compassionate man (Matthew 1:19) and they clearly loved Jesus (Luke 2:48). But as important as His relationship with His earthly parents was, it was Jesus’ relationship with His Heavenly Father that was crucial to His earthly life and mission. And it’s exactly the same for us – your upbringing may have been great or it may have been far from ideal but it’s your relationship with your Heavenly Father, which is fundamental to how you live your life from now on! So let’s take a look at how Jesus related to His Heavenly Father.

The first audible words of God that are recorded in the New Testament are God the Father’s declaration of love and affirmation of His Son just after Jesus’ baptism in the river Jordan:

Matthew 3:16-17
16As soon as Jesus was baptized, he went up out of the water. At that moment heaven was opened, and he saw the Spirit of God descending like a dove and alighting on him. 17And a voice from heaven said, “This is my Son, whom I love; with him I am well pleased.”

At this point, Jesus had performed no miracles; He had no disciples or any followers and yet His Father said He loved Him and was well pleased with Him. Jesus did not have to do anything to be loved by His Father and be pleasing to Him and so it is with us – we do not need to do anything to be loved by our Heavenly Father or to be pleasing to Him. We can simply receive His love for us! It’s just the same when a baby is born. It cannot do anything; it’s helpless and weak. It needs full-time care and yet it’s loved by its parents and is a source of delight. Well whilst that’s true for children and for Jesus, you might be thinking that your sin has made you displeasing to God and unlovable. Let’s look into that a bit closer. We already saw that Jesus said “…everyone who hears these words of mine and puts them into practice is like a wise man who built his house on the rock.” (Matthew 7:24). So let’s look at some of Jesus’ own words. Jesus said:

John 3:16
For God so loved the world that he gave his one and only Son, that whoever believes in him shall not perish but have eternal life.

Jesus said that God sent Him because He loved the world in order to save whoever believes. He did not send Jesus to perfect sinless people in a perfect sinless world, but in order to save us and make us perfect and sinless in His sight. Some time later Jesus was asked “What must we do to do the works God requires?”
Jesus answered, “The work of God is this: to believe in the one he has sent.” (John 6:29)

Let’s also have a look at what the apostle Paul said:

Romans 5:8
But God demonstrates his own love for us in this: While we were still sinners, Christ died for us.

Later in the same passage Paul went on to say that we all became sinners through Adam’s sin, but because of Jesus’ obedience, those who receive Him have been given a gift of righteousness and made righteous!

Isn’t it amazing that God no longer sees us as sinners but as righteous like His Son! So it’s because of Jesus that God is pleased with you! You are not only righteous like Jesus, you are undergoing transformation into His image
(2 Corinthians 3:18) and you smell like Him too:

Beloved at the beginning of this New Year let your Heavenly Father’s love for you become your sure foundation just as it was for Jesus! Believe the truth that because He is well pleased with Jesus, He is well pleased with you. Simply believe in His love for you, receive it and allow yourself to be firmly rooted and established in it. Then as Jesus said, when difficult times come, you will be able to stand firm. Finally let Paul’s prayer for the Ephesians become your prayer for this New Year:

Ephesians 3:17-19
…And I pray that you, being rooted and established in love, 18may have power, together with all the Lord’s holy people, to grasp how wide and long and high and deep is the love of Christ, 19and to know this love that surpasses knowledge—that you may be filled to the measure of all the fullness of God.