No Word From God Will Ever Fail 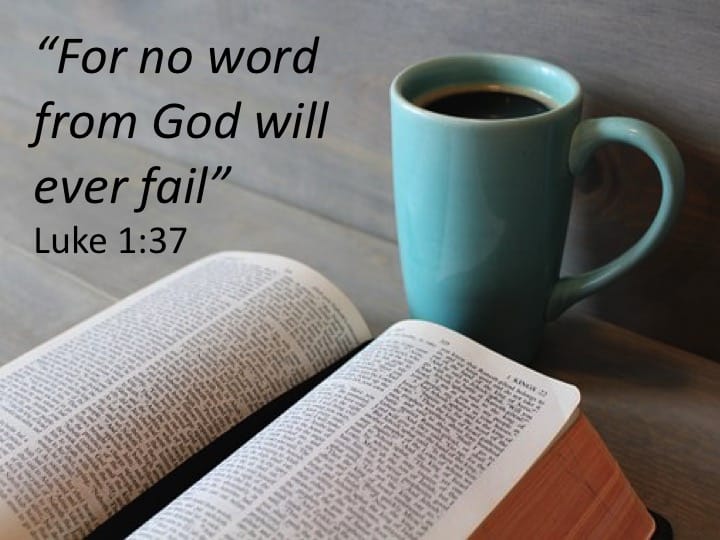 The beginning of a new year is a good time to reflect on your hopes and dreams for the year ahead, to set goals and to make plans. It is the season of new beginnings where we can put the past behind us and look to the future. For some of you, 2016 has been a year of breakthrough, advancement and perhaps even the fulfilment of dreams and you can anticipate that 2017 will bring even more opportunities to build on that momentum. If so, now is a great time to thank God for bringing you this far, dedicate the coming year to Him and ask for even greater favour! Just like the Old Testament prophet Samuel and even Jesus Himself, you can continue to grow in wisdom and favour with God and with man:

1 Samuel 2:26
And the boy Samuel continued to grow in stature and in favor with the Lord and with people.

Luke 2:52
And Jesus grew in wisdom and stature, and in favor with God and man.

For others of you 2016 may have been a difficult year marked by discouragement, disappointment, and even hopelessness. Well whatever the cause of your troubles, whether they were a result of your own wrongdoing or someone else’s or were no one’s fault at all, the start of a new year is a good time to receive afresh the abundant grace that the Lord desires to pour into your life (Romans 5:17), fix your eyes on Jesus (Hebrews 12:2) and let Him restore your hope and the joy of your salvation (Romans 15:13).

“Do not be afraid, Zechariah; your prayer has been heard. Your wife Elizabeth will bear you a son, and you are to call him John.” (Luke 1:13)

If like Zechariah and Elizabeth, you have been in a season of barrenness, there are several reasons why their stories can encourage you.

Firstly we can be encouraged that God hears our prayers – Gabriel said to Zechariah that his prayer had been heard and he and Elizabeth would have a son. We know they were very old and childless, so this tells us that Zechariah must have been praying for a child, probably for a very long time. He no doubt wondered if God had heard his prayer and from his response to Gabriel we can see that he had certainly long given up expecting an answer to that particular prayer (Luke 1:18). But the delay in the answer was simply a matter of God’s timing. So if you have been praying for something for a long time, let Gabriel’s words speak to you too: “your prayer has been heard”.

Secondly God does not forget His promises to us! People’s names in the bible have a meaning which are often significant to their lives. Zechariah is a Hebrew name which means “Yah (God) has remembered” and Elizabethmeans “God is an oath”.
I suspect that like Abraham and Sarah, that other childless elderly couple from centuries earlier, Zechariah and Elizabeth had received the promise of a child. When God gives you a promise, He will fulfill it, in His own perfect time, even if it is impossible naturally! Through their very names, God was reminding Zechariah and Elizabeth that He remembered His promises.

A few months later Gabriel also appeared to a young virgin named Mary and told her she was going to conceive and give birth to Jesus, the Son of God (Luke 1:31, 35). At the same time he told her about her cousin Elizabeth’s miraculous pregnancy:

Luke 1:36-37
Even Elizabeth your relative is going to have a child in her old age, and she who was said to be unable to conceive is in her sixth month. 37For no word from God will ever fail.”

Like Mary, Zechariah and Elizabeth we can be assured that “no word from God will ever fail.”  Thank God that when God makes a promise, we can be certain that it will not fail even if, like Zechariah, we doubt God’s word – but there is a blessing in believing! When Elizabeth saw Mary, she declared:

Luke 1:45
“Blessed is she who has believed that the Lord would fulfill his promises to her!”

So at the start of this New Year, take heart that God has heard your prayer and remembers His promises. Be encouraged that “no word from God will ever fail”, dare to believe the Lord will fulfill His promises to you and receive your blessing!