Positioned For Favour: A Tale of Two Women 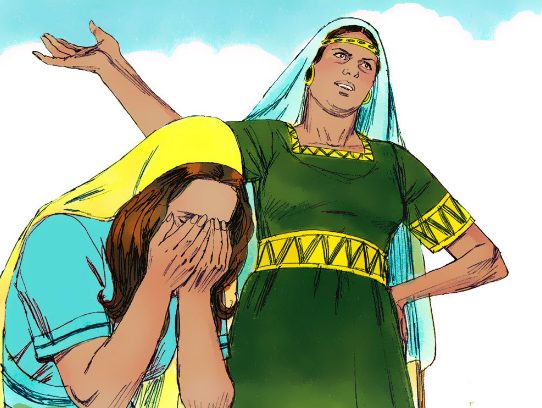 Year after year it was the same. The whole family made the pilgrimage to Shiloh to worship and sacrifice to the LORD. It was supposed to be a time of joy and celebration, of thankfulness for every blessing but Hannah felt anything but blessed. Quite the opposite, she was full of pain and misery. For her it was a yearly reminder of her inadequacy and that the Lord had forgotten her. She was barren, unable to give her husband Elkanah any children. How ironic that her name meant favoured! Even that was a humiliation! Where was her favour? Penninah, Elkanah’s other wife loved to boast how the Lord had blessed her with many sons and daughters. How thankful she was to have been able to provide Elkanah with heirs. The Lord had shone His face upon her. She loved to talk about it all the way to Shiloh. And what could Hannah say? It was all true. But by the time they got there, Hannah was always in despair, trying to hide the tears that she could no longer hold back. She had no appetite even though Elkanah always gave her a double portion of the sacrificial lamb. It was his way of showing that she meant more to him than the children she couldn’t give him. He hated to see her crying. He hated that she couldn’t eat and enjoy this special time. He loved her so much, why that wasn’t enough for her? Shiloh[1] was supposed to be a place of peace but Hannah felt only turmoil.

We find Hannah’s story in 1 Samuel 1 and 1 Samuel 2 . Hannah means “favoured” and yet she was barren. Furthermore the bible tells us twice that her barrenness was the Lord’s doing, (1 Samuel 1:5–6). But we also learn that her husband Elkanah, loved her and always gave her a double portion of the sacrificial meat. In Deuteronomy 21:17 Moses commanded that a father’s firstborn son should receive a double portion of the inheritance. So from Hannah’s story we see that favour begets a double portion inheritance. No doubt Hannah was conflicted. She knew her name meant favour, she knew her husband loved her deeply and gave her a double portion but her barrenness and Penninah’s constant provocation must have made it difficult to see the favour of God on her life. And if her story had ended there, with her remaining in a place of weeping and depression year after year, she would never have experienced the full manifestation of His favour. Hannah’s life teaches us the important lesson that sometimes the Lord Himself stops us from receiving what we are longing for. At those times Satan will often use the delay in order to provoke us to misery and discouragement to try and prevent us from ever getting the firstborn blessing that is our right as co-heirs with Christ, (Romans 8:17). But thank God that wasn’t the end of Hannah’s story because she came to the point where she turned to the One who had always had His eye upon her and whose ear was always attentive to her cry. (Psalms 34:15)

As usual she felt so miserable while everyone else was eating and drinking. She could think of nothing else except how much she wanted a child, a son. But this time hope began to arise in her heart, just a glimmer at first, then more and more insistent, reminding her that the Lord was merciful, gracious and loving. Remember how He had heard the cries of her people when they were slaves in Egypt? Remember how He had delivered them through the waters of the Red Sea? She was here at Shiloh precisely because He had heard them, and He had answered. So as soon as everyone had finished eating and drinking, she rose up and went straight to the Lord’s house, weeping in anguish and desperate to pour her heart out to Him. And she made a vow, saying:

“Lord Almighty, if you will only look on your servant’s misery and remember me, and not forget your servant but give her a son, then I will give him to the Lord for all the days of his life, and no razor will ever be used on his head.” (1 Samuel 1:11)

She hadn’t noticed Eli the priest sitting on his chair by the doorpost of the Lord’s house watching her. She must have looked drunk as she moved her lips fervently in silent prayer amidst the constant stream of tears.

“How long are you going to stay drunk? Put away your wine.” Eli said.

“Not so, my lord,” Hannah replied, “I am a woman who is deeply troubled. I have not been drinking wine or beer; I was pouring out my soul to the Lord. Do not take your servant for a wicked woman; I have been praying here out of my great anguish and grief.”

Eli answered, “Go in peace, and may the God of Israel grant you what you have asked of him.”

She said, “May your servant find favour in your eyes.” Then she went her way and ate something, and her face was no longer downcast. (1 Samuel 1:15-18)

Whenever we experience a delay in receiving our breakthrough, there will always be Penninahs in our lives, who represent Satan’s attempts to provoke us to discouragement, but God always has a greater purpose in delay. In those times we need to lean into Him intimately, to pour out our hearts like Hannah, because it is out of intimacy with the Lord that fruitfulness is birthed.

Even before she received the answer to her prayer and became pregnant with her son, she received peace, she began to trust in the Lord’s favour, regained her appetite and was no longer discouraged. And the next morning she was truly able to worship the Lord with the rest of the family. Then when they went home, we are told the Lord remembered her and she became pregnant and gave birth to a son whom she named Samuel, which means “heard by God”.

So, if you are in a season of delayed answers, don’t allow Satan to provoke you to discouragement and to lose your hope in God. These two women, Penninah and Hannah, represent the fruit which comes from human strength versus the fruit born out of God’s favour. Penninah did not need to rely on the Lord to conceive her children, rather she gloated in her own natural ability whereas Samuel was born from intimacy with the Lord. He was the son of favour. We don’t know the names of any of Penninah’s many children, but two books of the bible are named after Samuel because he went on to become a great prophet of God of whom it is said:

The Lord was with Samuel as he grew up, and he let none of Samuel’s words fall to the ground. (1 Samuel 3:19)

Today if you have stumbled and fallen into despair, hopelessness and discouragement, then like Hannah you can turn to the Lord and receive His strength. You don’t have to stay in that place of anguish, but you can position yourself for favour. As Hannah discovered:

The bows of the warriors are broken, but those who stumbled are armed with strength. (1 Samuel 2:4)

In the end, whatever is born out of human strength amounts to nothing, but favour leaves a legacy.

[1] Shiloh comes from the root Hebrew verb shalah meaning to be tranquil, at ease, prosperous