Trusting against the Odds 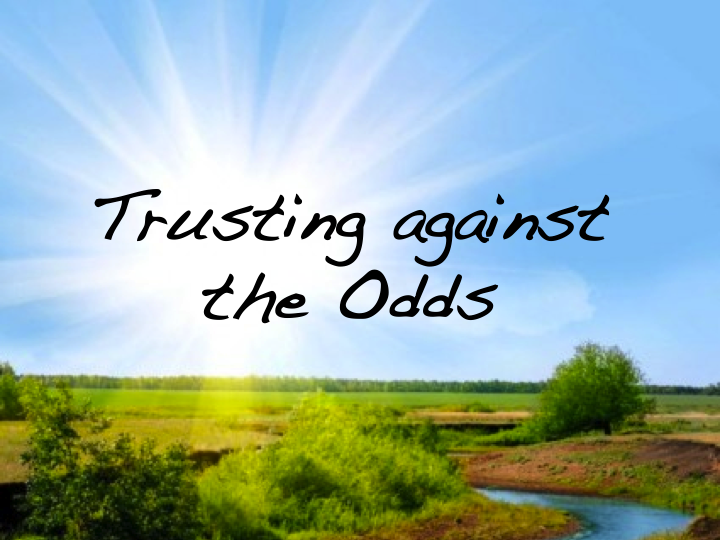 In my bible reading today I came across this verse:

2 Chronicles 16:12
In the thirty-ninth year of his reign Asa was afflicted with a disease in his feet. Though his disease was severe, even in his illness he did not seek help from the LORD, but only from the physicians.

It is clear that the Lord always wants us to seek his help when we are afflicted. Asa was considered one of the good kings of Judah. He reigned for 41 years. He started out very well removing the idolatrous altars and Asherah poles from Judah and commanding the people to turn back to the Lord. And the Lord prospered him. When Zerah the Cushite marched out to attack Judah with an army vastly superior in numbers and equipment to Judah’s army, Asa called upon the Lord for help saying:

2 Chronicles 14:11
“Lord, there is no one like you to help the powerless against the mighty. Help us, Lord our God, for we rely on you, and in your name we have come against this vast army. Lord, you are our God; do not let mere mortals prevail against you.”

The Lord gave Asa a wonderful victory. He struck down the Cushites in front of Asa and Judah. The Cushites fled, and Asa and his army pursued them and carried off a large amount of plunder!

However, things began to go wrong in the latter part of Asa’s reign. In the 35th year of his reign Baasha, king of Israel became hostile to Judah. But this time, rather than relying on the Lord for deliverance, Asa relied on his wealth. He took the silver and gold out of the Lord’s temple treasuries and his own palace and sent it to Ben-Hadad king of Aram, who was ruling in Damascus and he made a treaty with him. It had the desired effect in the short term and Baasha abandoned his plans against Judah. But relying on our wealth or on pacts with the ungodly, (in this case the king of Aram) is never a good idea. The Lord sent a prophet Hanani to tell Asa:

2 Chronicles 16:7-9
“Because you relied on the king of Aram and not on the Lord your God, the army of the king of Aram has escaped from your hand. 8Were not the Cushites and Libyans a mighty army with great numbers of chariots and horsemen? Yet when you relied on the Lord, he delivered them into your hand. 9For the eyes of the Lord range throughout the earth to strengthen those whose hearts are fully committed to him. You have done a foolish thing, and from now on you will be at war.”

Had Asa been fully committed to the Lord, both Baasha and the king of Aram would have been defeated and no doubt Asa would have ended up even more powerful and wealthy than before. However rather than repent for his mistake, Asa became so enraged that not only did he put the prophet in prison, he even brutally oppressed some of his own people. His reliance on wealth and his own plans, led to rage, brutality and rebellion against God.

Asa’s reign was cut short by a strange disease affecting his feet:

It was a sign of Asa’s rebellion that he ONLY went to physicians. Of course there’s nothing wrong with going to physicians (and we thank God for them), but the Lord expects us to seek His help in times of affliction. Despite Asa’s sin, the Lord would have healed him if Asa had sought his help (cf. Hezekiah’s healing in 2 Kings 20). Ironically Asa probably means “healer”!

Let this be an encouragement to us to always seek the Lord first when we face any type of difficulty- for those problems which overwhelm us with fear, God is able and willing to rescue us and for those issues we think we can handle ourselves, His ways will always produce the best results. He will deliver us and bring us out better off than we were before and if we are sick, He will heal us!

Asa should have known better as his ancestor King David had written this to encourage him and to encourage us:

Psalm 20:6-8
6Now this I know:
The Lord gives victory to his anointed.
He answers him from his heavenly sanctuary
with the victorious power of his right hand.
7Some trust in chariots and some in horses,
but we trust in the name of the Lord our God.
8They are brought to their knees and fall,
but we rise up and stand firm.

And if you are a believer in Jesus today then you are His anointed:

Thank You Lord Jesus that I am one of your anointed ones. Thank You that Your word promises to give me victory. Help me to fix my eyes upon You Jesus and to trust in Your Name today that you will give me victory in whatever I am facing.
In Your Name I will rise up and stand firm. Amen!