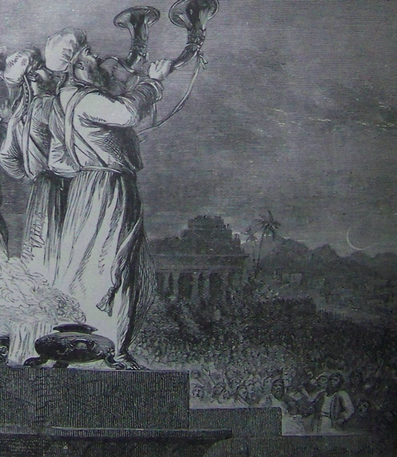 When the Lord gave Moses the law, there was much more to it than just the 10 Commandments (Exodus 20). He also gave many other rules and regulations that on the surface may seem irrelevant, but there is no detail in God’s word that is insignificant. In Numbers chapter 10, the Lord told Moses to:
​
2“Make two trumpets of hammered silver to be used for calling the congregation and for having the camps set out. (Numbers 10:2 Berean Study Bible)

At that time the Israelite community was camped out in the wilderness awaiting their journey into the Promised Land. These trumpets were used to signal the community or its leaders to assemble, or the tribes to set out, with different signalling blasts. Short blasts signalled that the Israelite camps should set out and long blasts signalled the assembly should gather together:

Now unlike the ram’s horn (shofar) which any member of the community could blow, the silver trumpets could only be sounded by the priests (sons of Aaron).

8The sons of Aaron, the priests, are to sound the trumpets. This shall be a perpetual statute for you and the generations to come. (Numbers 10:8 Berean Study Bible)

There were two other times the silver trumpets were to be blasted. When the Israelites had to go into battle in their land against an adversary who was attacking them, they were to sound short blasts and the Lord promised He would deliver them from their enemies. Finally at their times of rejoicing, appointed feasts and at the beginnings of each month they were sound long blasts over their burnt offerings and fellowship offerings to serve as a reminder that the Lord was their God.

9When you enter into battle in your land against an adversary who attacks you, sound short blasts on the trumpets, and you will be remembered before the LORD your God and saved from your enemies. 10And on your joyous occasions, your appointed feasts, and the beginning of each month, you are to blow the trumpets over your burnt offerings and fellowship offerings to serve as a reminder for you before your God. I am the LORD your God.” (Numbers 10:9-10 Berean Study Bible)

Let’s fast forward approximately 500 years and the Israelites had entered their promised land but because of the sin of King Solomon leading the people into idol worship, Israel had been split into two kingdoms (1 Kings 11:9-13), the Northern kingdom which at that time was under the leadership of King Jeroboam and the Southern kingdom of Judah which was under the leadership of King Abijah. Though God had allowed the division of the nation, because of His covenant with David (2 Samuel 7:12-16), the Lord had promised there would always be one of David’s descendents on the throne. Abijah was the great-grandson of David, but ultimately this promise would be fulfilled by David’s greatest descendant, Jesus, Son of David. Now a summary of Abijah’s kingship can be found in 1 Kings 15. He was not a good king. His heart was not fully devoted to the Lord and so he only ruled for 3 years after which he died and his son Asa succeeded him as king. But despite this, there is an event during his reign which stands out. It can be found in 2 Chronicles 13. Jeroboam had come with an army of 800,000 fighting men to fight against Abijah, who had an army of 400,000. Abijah called upon the covenant the Lord had made with his great grandfather David:

4Then Abijah stood on Mount Zemaraim in the hill country of Ephraim and said, “Hear me, O Jeroboam and all Israel! 5Do you not know that the LORD, the God of Israel, has given the kingship of Israel to David and his descendants forever by a covenant of salt?…..8And now you think you can resist the kingdom of the LORD, which is in the hands of David’s descendants. You are indeed a vast army, and you have with you the golden calves that Jeroboam made for you as gods….10But as for us, the LORD is our God. We have not forsaken Him; the priests who minister to the LORD are sons of Aaron, and the Levites attend to their duties…..12Now behold, God Himself is with us as our head, and His priests with their trumpets sound the battle call against you. O children of Israel, do not fight against the LORD, the God of your fathers, for you will not succeed.” (2 Chronicles 13:4-5,8,10,12 Berean Study Bible)

The covenant the Lord had made with David was an everlasting covenant. This is why Abijah called it a covenant of salt as to all intents and purposes, salt is indestructible. The covenant was not conditional on David’s or his descendants’ behaviour but rather an everlasting promise God made to David. So Abijah could rightfully call upon this covenant as security that the Lord would defend him. Moreover, he had brought with him the priests with their silver trumpets according to the regulations given in Numbers 10. Now Jeroboam had placed his troops (which outnumbered Judah’s two to one), behind as well as in front of the men of Judah:

14When Judah turned and discovered that the battle was both before and behind them, they cried out to the LORD. Then the priests blew the trumpets, 15and the men of Judah raised the battle cry. And when they raised the cry, God routed Jeroboam and all Israel before Abijah and Judah. 16So the Israelites fled before Judah, and God delivered them into their hands. 17Then Abijah and his people struck them with a mighty blow, and 500,000 chosen men of Israel fell slain. 18Thus the Israelites were subdued at that time, and the men of Judah prevailed because they relied on the LORD, the God of their fathers. (2 Chronicles 13:14-18 Berean Study Bible)
​
So Abijah called upon the Davidic covenant of salt and the priests sounded the two silver trumpets and God delivered king Abijah and the people of Judah.
Now why did the Lord tell Moses to make two trumpets of hammered silver? Silver in the bible represents redemption – Joseph was sold for 20 pieces of silver (Genesis 37:28), and Jesus was betrayed for 30 pieces of silver (Matthew 26:15). The hammering represents the blows that Jesus received on our behalf so the hammered silver represents the redeeming sacrifice of Jesus. The silver trumpets were only to be blown by the priests who represent man to God (Hebrews 5:1). When God heard the blasts of the two trumpets, He would remember the sacrifice of His Son Jesus which, though it was yet to come was made once for all time (Hebrews 10:10), the lamb slain before the foundation of the world (Revelation 13:8) and come to rescue His people. And why were there two trumpets? Two could represent the union of Jesus with us as His bride, or the death and resurrection of Jesus. Why were only short blasts to be sounded to call upon the Lord for deliverance from enemies? Because the Lord’s sacrifice was made once for all time and God doesn’t require long drawn out supplication to save us from our enemies. Why did God require the long blasts at times of rejoicing and over their burnt and fellowship offerings? Jesus’ resurrection gives us eternal life for which we can eternally rejoice!

So today whatever you are going through, remember you have access by faith into an unbreakable covenant made by the blood of Jesus Christ who is your Silver Trumpet and obtain deliverance in your time of need!